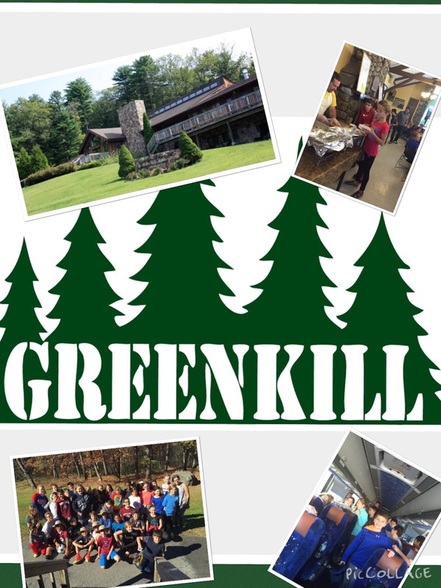 Last week, the sixth graders of NSMS went on the annual trip to Greenkill, a YMCA sleepaway camp located in upstate New York. The students and teachers were there for three days and two nights. This trip was a blast for all of the teachers and students!

At Greenkill, all the sixth graders learned a ton, such as team-building skills, survival skills, fun, skillful games, and presentations about animals, birds of prey and their feature. The naturalists from Greenkill taught the sixth graders important and helpful life lessons through fun activities. Ella Begley told me that “My favorite part of Greenkill was bunking with some of my friends and also meeting new people. I also liked all the hikes and fun games we played with the naturalists.”

A typical day at Greenkill consists of three meals, two sessions of learning time with your naturalist, free choice, cabin time and a night activity. During learning time some groups started off with a fun team building game. Then we would have a conversation so we could get to know each other better since we all came from different schools. After that we did some hiking and then found a spot in the woods to do an activity such as survival, fire building or “camouflage.” During free-choice everyone would meet in the cafeteria and each naturalist would pick some students to come play a game of their choice. At cabin time, everyone would hang out with their bunkmates and get their room organized. There were also some read-alouds and serious card games going on. Night activities were a favorite of many students. On the first night, we had a Birds of Prey presentation; there were real birds that we got to see in action, such as an eagle owl, a falcon and a barn owl. On the second night, we had an animal presentation. The students saw animals like a chinchilla, an alligator, a tarantula and many more.

A big issue stressed at Greenkill is food waste. During meals there was a white bucket on each dining table, any food left over that could have been eaten goes into these buckets and then gets weighed. At the sixth grades first meal there was about 30 pounds of food waste, and by the last meal, there was only a pound. Another thing that happened during meals was KP or Kitchen Patrol duty. One or two people from each table had to go to the cafeteria early to set the table; then during the meal, they had to make sure everyone had what they needed, and, if not, get it; at the end the KP’s had to stay late and wipe down the table and sweep the surrounding area. Being a KP was a tough job but taught students how to be responsible and helpful.

There were so many fun and exciting new things that the students were a part of, so I asked some students what their favorite part of Greenkill was! Matty Papiro said, “My favorite part of Greenkill was the survival skills. In survival skills we got to go hiking and learn about plants, animals and even water life. We even got to build our own wood homes in the woods and create fire with dryer lint.

A lot of kids in the sixth grade have never been away from home other than a sleepover at a friend’s house. Since this was a new experience for many, a lot of kids were nervous about the trip. Isabella told me “I was really super excited but the morning we left I got a little nervous,” . Amanda Ayres mentioned, “…I was also very excited because I heard that it was really fun and I would have a good time.” There were definitely mixed emotions before Greenkill; the question is: how did the students feel during Greenkill?

I asked the same students how they felt looking back on Greenkill; Amanda, who said she was nervous about Greenkill in the beginning told me, “I was upset to leave Greenkill and I missed it, but I was also very glad to get home and see my family.” Matty Papiro said, “My feelings changed; I now know that I have to say to myself ‘You can do this’ to build confidence. It helped being with my close friends the whole time.” A lot of kids I talked to felt the same way that these kids did! Greenkill was an unforgettable experience for many students.

Greenkill is something that will be remembered forever at NSMS. Not only did all the students learn so much, but they also got to make new friends. This trip really brought everyone together, we are not from Glenwood Landing, Glen Head or Sea Cliff, We are from North Shore Middle School.